Those of you familiar with SPSS will probably know the 'Variables view' facility. This is a part of the interface where you can view and change meta information about variables. Here, you can change the names, the labels, define the variable type and alignment and so on.

It's quite a useful function and now Salstat has something similar. It isn't the same, however – Salstat was never meant to be a replica, but an improvement on SPSS.

Here's a screenshot of the variables grid. It's accessible when you open Salstat – just click on the 'Variables' tab. 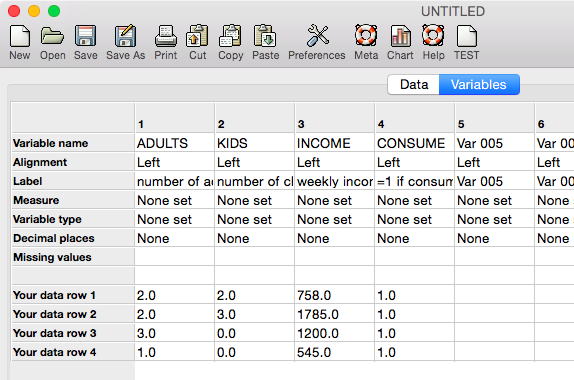 Variables on SPSS are aligned horizontally which differs from the data grid. In Salstat, we've instead decided to display variables vertically: Each column is a variable and it makes more sense to me because they correspond more directly. Some example data are also shown in the four bottom rows so that users don't have to keep clicking between the data and variables grids to remind them of what's there.

You can also set how data are aligned in a column: Left, centre or right. We did want a drop-down for this but the toolkit we used didn't work out too well.

But you can still define how a variable's data are aligned. You just have to type in 'left', 'centre' or 'right', and this will change how the variable is aligned. In fact, you only have to enter the first letter. In the below example, I'm changing the first variable so that the data are aligned right. I do this by just typing the letter 'r' and pressing tab. 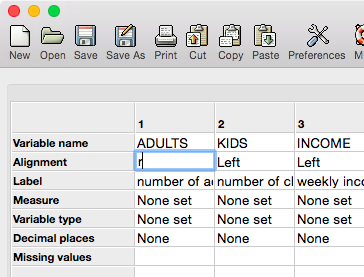 In this next screenshot, Salstat has assumed that by typing in 'r', I want right-alignment and it substitutes the full word, "Right". This is so anyone else reading this dataset will understand it. 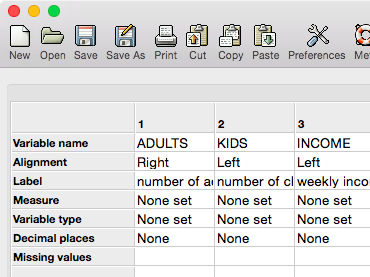 Currently, this variables grid is not completely functional. Things like defining the variable measure (nominal, ordinal, interval or ratio) and the type (independent variable or dependent variable), decimal places to display and missing values have yet to be implemented, but they're on the way.